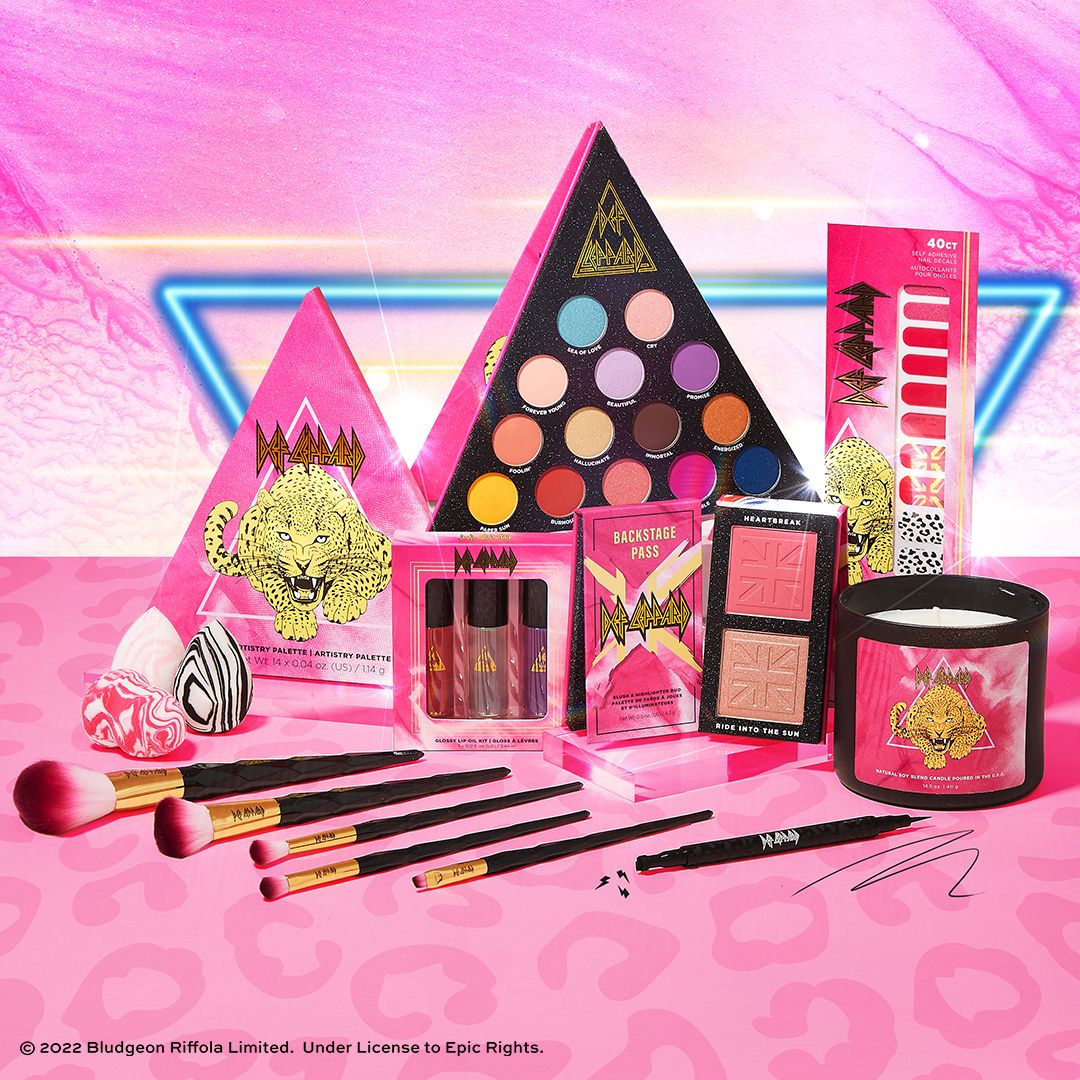 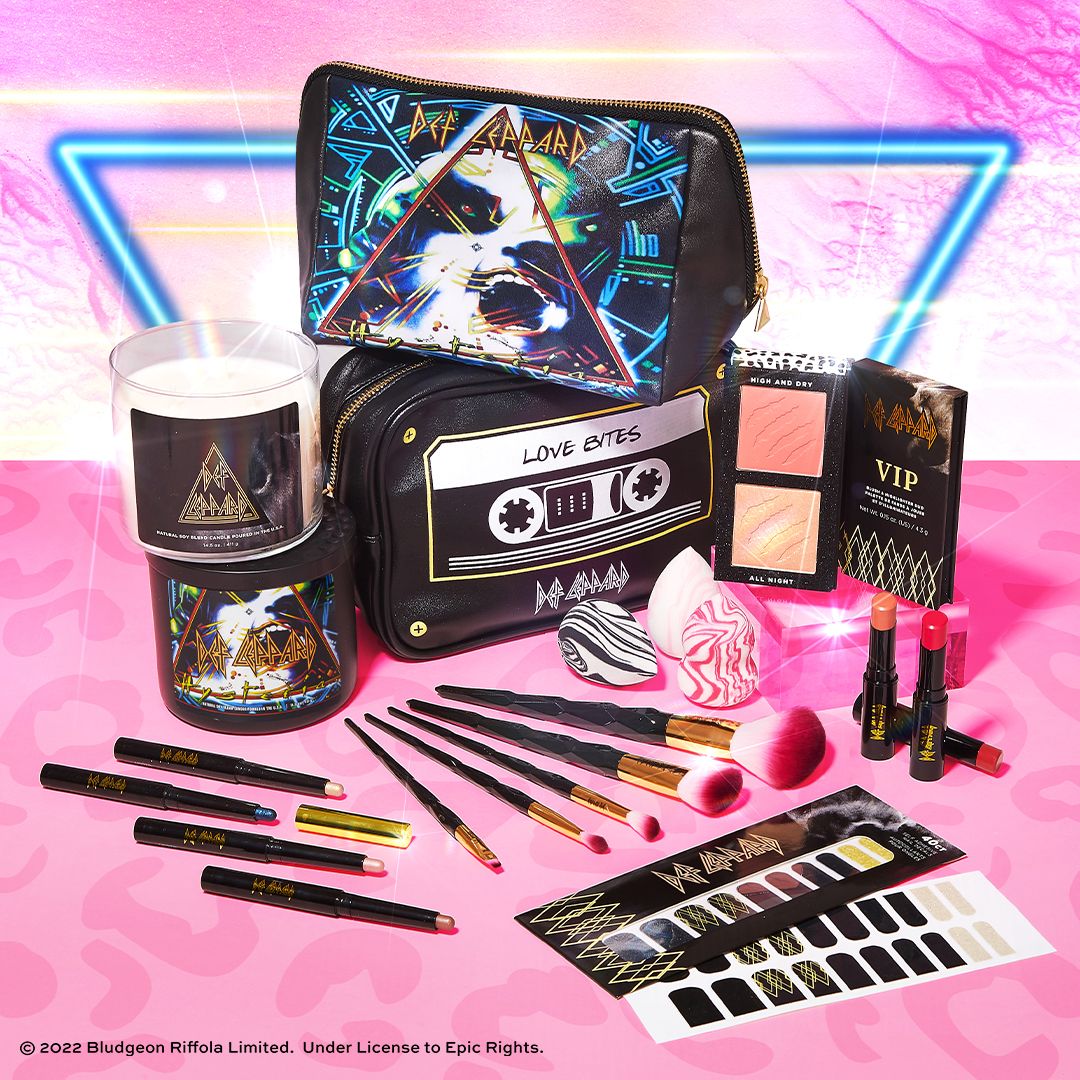 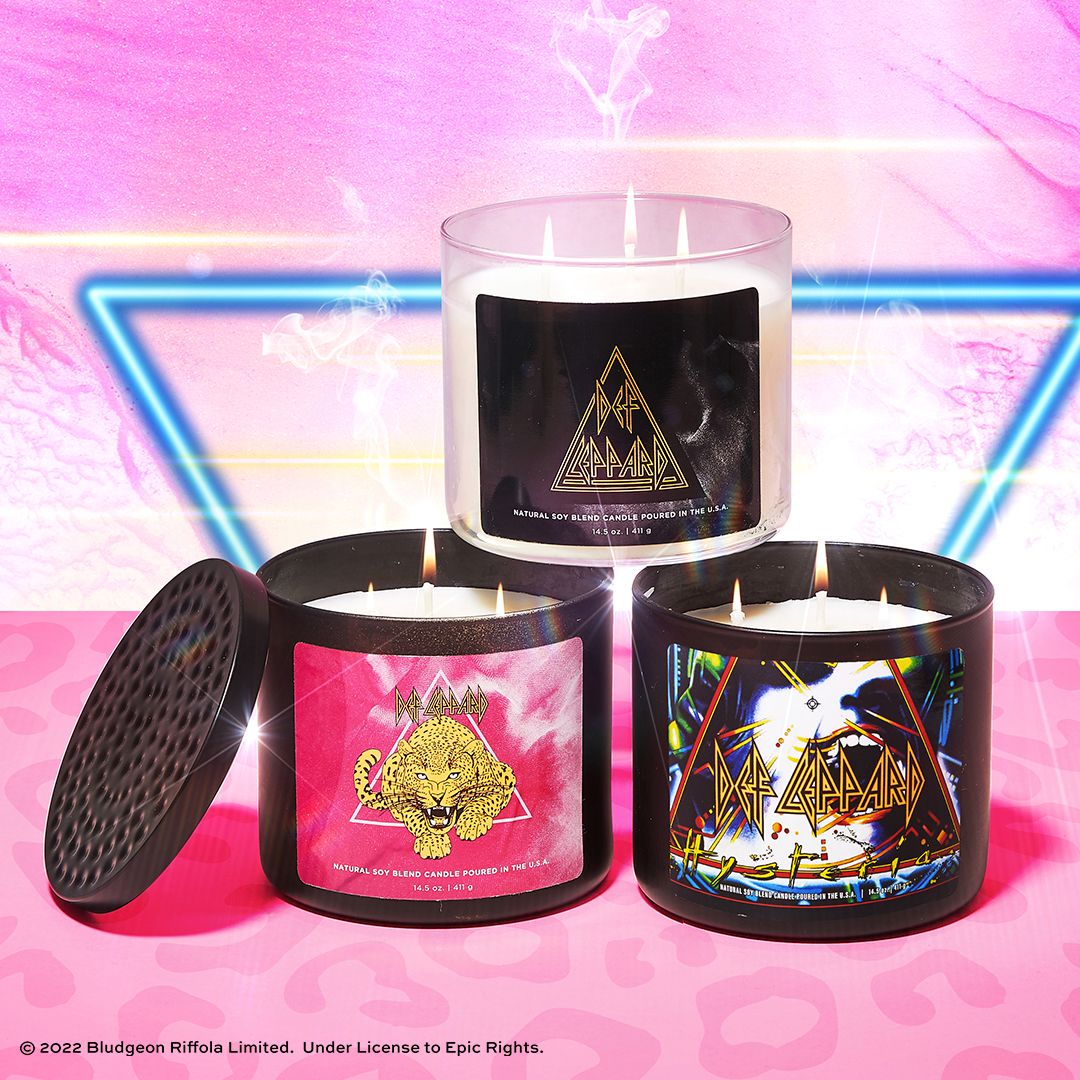 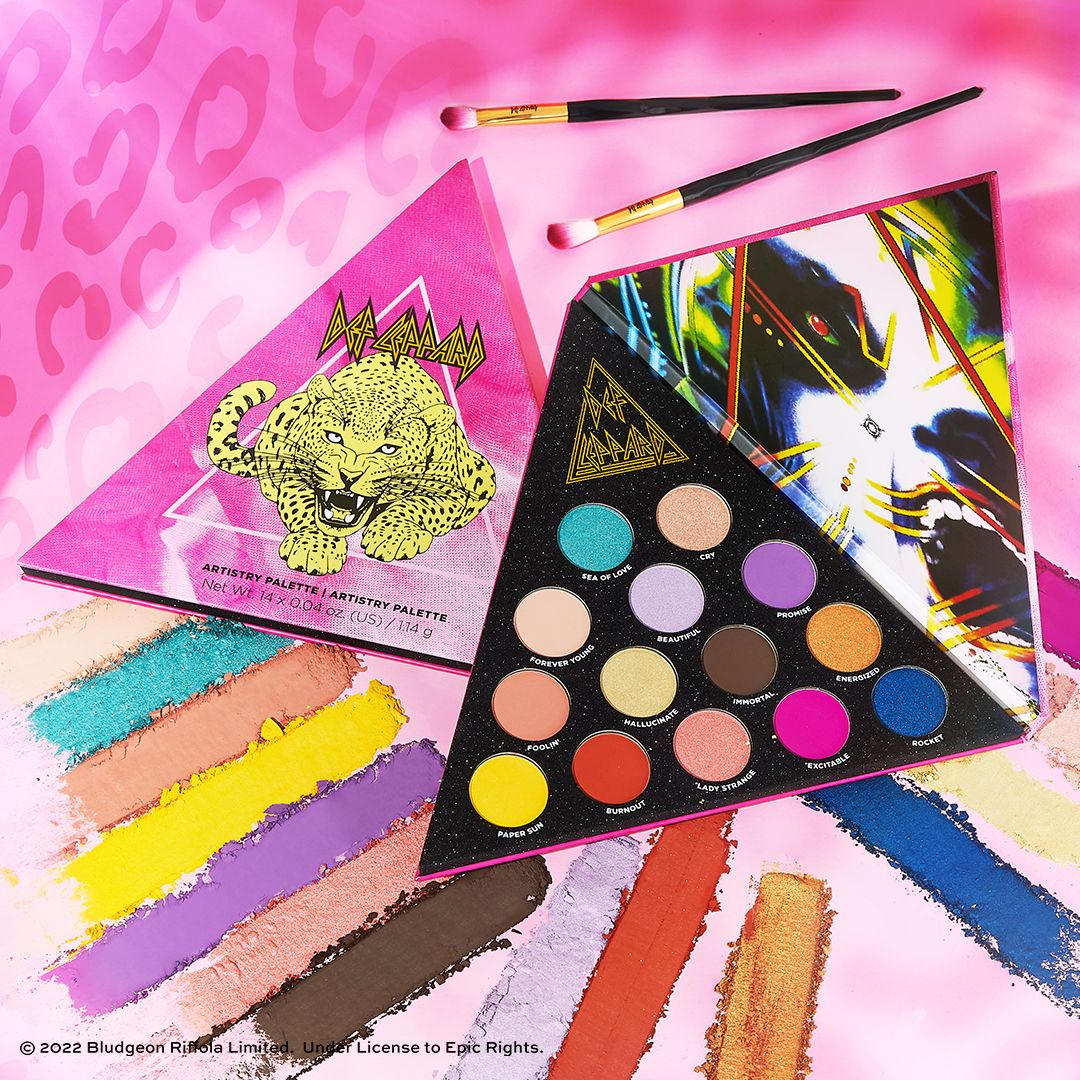 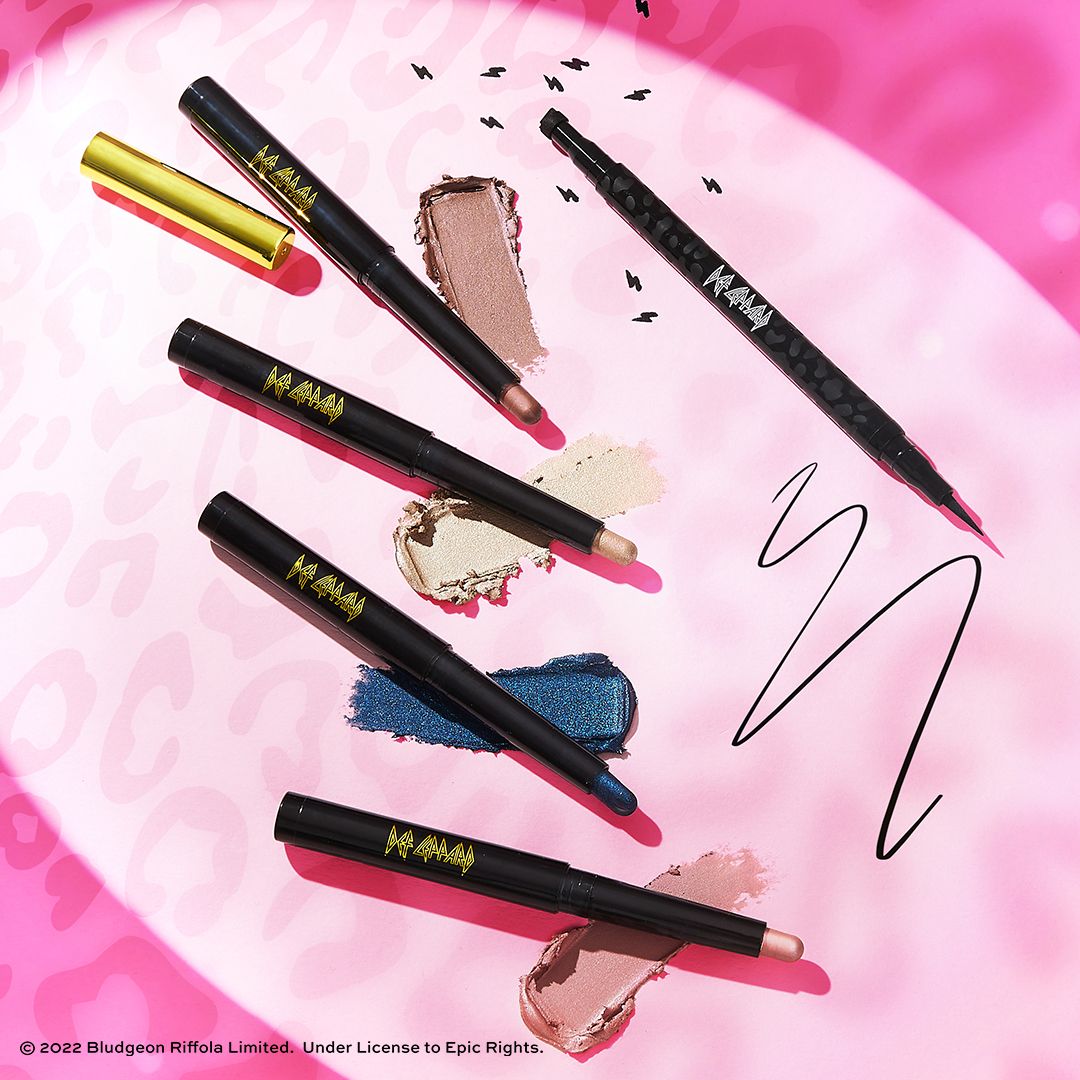 With its shimmery pinks and metallic shades such as Rocket Blue, this 19-piece collection is highly pigmented and designed to give you a rock-star look! It's available exclusively in Ulta Beauty stores nationwide, www.ulta.com and www.rockandrollbeauty.com.

ABOUT THE DEF LEPPARD COLLECTION:

Through a unique collaboration with Def Leppard, the licensing agent Epic Rights, and the designers at Rock and Roll Beauty, comes this distinctive and nostalgic collection. From the one-of-a-kind iconic triangular artistry palette, with its 14 vibrant shades, to the Union Jack debossed peachy blushes, each product in the line was designed to reflect the rock and roll era that truly was a groundbreaking musical phenomena.

With more than 110 million albums sold worldwide and two prestigious Diamond Awards in the U.S., 2019 Rock & Roll Hall of Fame® inductees Def Leppard - Joe Elliott (vocals), Phil Collen (guitar), Rick Savage (bass), Vivian Campbell (guitar) and Rick Allen (drums) — continue to be one of the most important forces in rock music. Over the course of their career the band has produced a series of classic ground-breaking albums that set the bar for generations of music fans and artists alike. The group's spectacular live shows and arsenal of hits have become synonymous with their name, leading Def Leppard to be heralded as the world's greatest live rock band. Def Leppard's influential career includes numerous hit singles and ground-breaking multi-platinum albums—including two of the best-selling albums of all time, Pyromania and Hysteria, capturing the group's legendary tracks, bringing together classic Leppard hits such as "Rock of Ages," "Pour Some Sugar on Me" and "Foolin."  For the first time, in January 2018 Def Leppard debuted their full recording catalog worldwide via streaming and download platforms. As they did with the original release of their records, Def Leppard dominated the worldwide charts again, which found their albums charting in the iTunes Top 10 in more than 30 countries, including Hysteria at #3 in the US, and #5 in the UK.  Def Leppard also had the #1, #2 and #3 records on the US catalog albums chart. The band have gone on to amass a staggering 5.5 billion streams since 2018, reaching a younger 18-44 demographic that now represents 58% of their fanbase. Additionally, the band have garnered an impressive 15 million followers across their social media platforms. In May 2022, Def Leppard released their twelfth studio album Diamond Star Halos. The album debuted at #1 on the Apple and Amazon Music charts. The album also scored a Top 10 debut on Billboard's Top 200 Albums chart, marking the band's eighth Top 10 album of their career, and also making them one of just three groups with a newly charting top 10 title on the Billboard 200 albums chart in each decade since the '80s. Diamond Star Halos additionally garnered a #1 debut on Billboard's Hard Rock chart. Following the close of their historic 2018 co-headline stadium and arena run in North America, Def Leppard sold a staggering 1,000,000 tickets and the tour grossed over $100,000,000.00, a massive feat in today's touring world. Def Leppard will top that number yet again with another sold out North American stadium run in 2022 with Motley Crue. As always, the group keep pushing the boundaries with their electrifying live shows.

More on indianastop.com
ABOUT EPIC RIGHTS

ABOUT ROCK AND ROLL BEAUTY:

Rock and Roll Beauty marries nostalgia with the artistry of today's finest beauty products and accessories. Our talented designers create limited edition collections working with your favorite blasts from the past. Each collection is skillfully curated to encompass the uniqueness of each reminiscence and combine it with the latest in cruelty free cosmetics and accessories. From our unique one of kind collectible palettes, to the metallic shimmer shades and tattoo stamp eyeliner, Rock and Roll Beauty will rock your world!