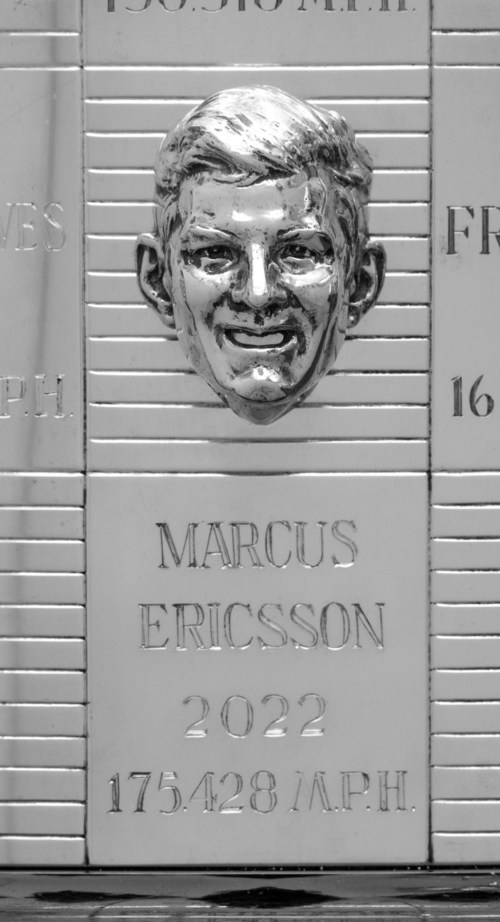 AUBURN HILLS, Mich., Oct. 27, 2022 /PRNewswire/ -- Marcus Ericsson has solidified his place in BorgWarner history by becoming the 109th face to be affixed to the Borg-Warner Trophy following his victory at the 106thIndianapolis 500. Ericsson's sterling silver image was officially unveiled during a ceremony at Union 50 in downtown Indianapolis as part of a special event hosted by the Indianapolis Motor Speedway. Ericsson, a Sweden native, will join the exclusive ranks of the  victors who came before him as he captured his first Indy 500 victory.

"The Borg-Warner Trophy represents much more than just a victory on the racetrack, it symbolizes the great tradition of the Indy 500 and honoring the driver for their triumph while paying homage to the champions of the past," said Michelle Collins, Global Director, Marketing and Public Relations BorgWarner. "It is our honor to add Marcus' image to the trophy and, together as a company, congratulate him on his countless hours of work and dedication to his craft."

Originally designed in 1935, the sterling silver trophy measures over 5 feet, 4-3/4 inches tall and weighs more than 110 pounds as it carries the sculpted face of every victor since 1911. Following the unveiling in Indianapolis, the trophy will travel to Ericsson's home country of Sweden to celebrate his victory on the racetrack.

William Behrends, the sculptor behind the iconic Borg-Warner Trophy faces, begins his creative process by studying a series of 360-degree photos of the winner to get a baseline for sculpting. Winners are then invited to an in-person session where Behrends constructs a full-scale clay model of the driver's face in his studio in Tryon, North Carolina. This life-size clay version is used as reference for Behrends to construct the smaller model, a piece created out of a mixture of oil-based clay. The smaller clay model is turned into a mold and casted in wax before being sent to a jeweler to be transformed into sterling silver. Behrends completes his process by polishing and buffing the sculpture before adhering it to the trophy.

"I'm truly honored to have my face sculpted onto the historic Borg-Warner Trophy as an Indianapolis 500 winner," said Ericsson. "It was an incredible experience to work with Will Behrends and see his dedication and artistry firsthand. Will has done a marvelous job. Today is a very special day for me, as well as everyone at Chip Ganassi Racing. Joining all the previous winners on the trophy is something I'll always be very proud of and will never forget."

More on indianastop.com
On Memorial Day weekend, under sunny skies and full grandstands, over 200,000 spectators watched Ericsson, who started fifth of 33 drivers, patiently bide his time and take the lead for good with 11 laps remaining to win his first Indy 500. While his first Indy 500 victory, it was the second time a driver from Sweden won, with countryman Kenny Brack taking top honors back in 1999. Ericsson averaged 175.428 mph for the 200 lap race and took home a record $3.1 million in winnings, keeping runner-up Pato O'Ward of Mexico and third place finisher, 2013 Indy 500 winner and teammate Tony Kanaan of Brazil at bay. His victory marks the fifth Indy 500 win for Chip Ganassi Racing since 2000, with previous winners Juan Pablo Montoya (2000), Scott Dixon (2008) and Dario Franchitti (2010 & 2012).

Early next year, Ericsson will receive his BorgWarner Championships Driver's Trophy, also known as the Baby Borg, a miniature replica of the large-scale Borg-Warner Trophy.

About BorgWarner
For more than 130 years, BorgWarner has been a transformative global product leader bringing successful mobility innovation to market. Today, we're accelerating the world's transition to eMobility — to help build a cleaner, healthier, safer future for all.

Forward-Looking Statements: This press release may contain forward-looking statements as contemplated by the 1995 Private Securities Litigation Reform Act that are based on management's current outlook, expectations, estimates and projections. Words such as "anticipates," "believes," "continues," "could," "designed," "effect," "estimates," "evaluates," "expects," "forecasts," "goal," "guidance," "initiative," "intends," "may," "outlook," "plans," "potential," "predicts," "project," "pursue," "seek," "should," "target," "when," "will," "would," and variations of such words and similar expressions are intended to identify such forward-looking statements. Further, all statements, other than statements of historical fact contained or incorporated by reference in this press release that we expect or anticipate will or may occur in the future regarding our financial position, business strategy and measures to implement that strategy, including changes to operations, competitive strengths, goals, expansion and growth of our business and operations, plans, references to future success and other such matters, are forward-looking statements. Accounting estimates, such as those described under the heading "Critical Accounting Policies and Estimates" in Item 7 of our most recently-filed Annual Report on Form 10-K ("Form 10-K"), are inherently forward-looking. All forward-looking statements are based on assumptions and analyses made by us in light of our experience and our perception of historical trends, current conditions and expected future developments, as well as other factors we believe are appropriate under the circumstances. Forward-looking statements are not guarantees of performance, and the Company's actual results may differ materially from those expressed, projected or implied in or by the forward-looking statements.

More on indianastop.com
You should not place undue reliance on these forward-looking statements, which speak only as of the date of this press release. Forward-looking statements are subject to risks and uncertainties, many of which are difficult to predict and generally beyond our control, that could cause actual results to differ materially from those expressed, projected or implied in or by the forward-looking statements. These risks and uncertainties, among others, include: supply disruptions impacting us or our customers, such as the current shortage of semiconductor chips that has impacted original equipment manufacturer ("OEM") customers and their suppliers, including us; commodities availability and pricing, and an inability to achieve expected levels of success in additional commercial negotiations with customers; competitive challenges from existing and new competitors including OEM customers; the challenges associated with rapidly-changing technologies, particularly as relates to electric vehicles, and our ability to innovate in response; uncertainties regarding the extent and duration of impacts of matters associated with the COVID-19 pandemic, including additional production disruptions; the difficulty in forecasting demand for electric vehicles and our electric vehicles revenue growth; potential disruptions in the global economy caused by Russia's invasion of Ukraine; the ability to identify targets and consummate acquisitions on acceptable terms; failure to realize the expected benefits of acquisitions on a timely basis including our recent acquisitions of AKASOL AG, Santroll's light vehicle eMotor business, Rhombus Energy Solutions and our 2020 acquisition of Delphi Technologies PLC; the ability to identify appropriate combustion portfolio businesses for disposition and consummate planned dispositions on acceptable terms; the failure to promptly and effectively integrate acquired businesses; the potential for unknown or inestimable liabilities relating to the acquired businesses; our dependence on automotive and truck production, both of which are highly cyclical and subject to disruptions; our reliance on major OEM customers; fluctuations in interest rates and foreign currency exchange rates; our dependence on information systems; the uncertainty of the global economic environment and potential for recessionary conditions in regional economies; the outcome of existing or any future legal proceedings, including litigation with respect to various claims; future changes in laws and regulations, including, by way of example, taxes and tariffs, in the countries in which we operate; impacts from any potential future acquisition or disposition transactions; and the other risks noted in reports that we file with the Securities and Exchange Commission, including Item 1A, "Risk Factors" in our most recently-filed Form 10-K and/or Quarterly Report on Form 10-Q. We do not undertake any obligation to update or announce publicly any updates to or revisions to any of the forward-looking statements in this press release to reflect any change in our expectations or any change in events, conditions, circumstances, or assumptions underlying the statements.