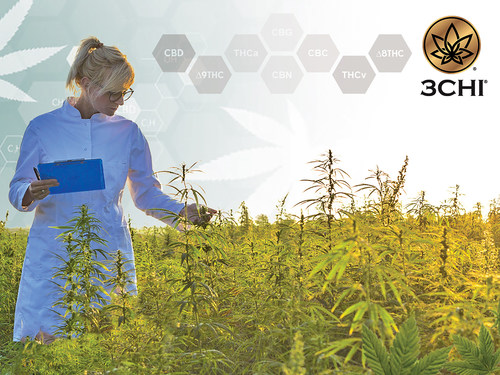 What is Delta 8 THC?
Delta 8 THC is a naturally existing compound found in the hemp variety of cannabis, and is part of a family of compounds called "cannabinoids". There are 140+ cannabinoids in the hemp plant, including another one you likely have heard of, which is CBD. Another familiar compound is Delta 9 THC, the active ingredient in Marijuana.

But even though it has "THC" in its name, Delta 8 THC has different effects and is much less potent than Delta 9 THC. Many regard Delta 8 as a happy medium between non-intoxicating CBD products and Delta 9 THC or Marijuana.

Where Does Delta 8 Come From?
Delta 8 occurs naturally in hemp, but it doesn't exist in large amounts. So in order to make the amounts needed for products, Delta 8 needs to be created. Fortunately, the process for making Delta 8 has been known and refined for over 80 years, dating all the way back to early research in 1941 at the University of Illinois.

And it's a relatively simple process due to the fact that many cannabinoids are so similar to one another that they can easily be changed into one another simply by modifying the processing environment for these cannabinoids. In the specific case of creating Delta 8, it can be as simple as changing the pH and temperature surrounding CBD to cause its change into Delta 8 THC.

Is Delta 8 Safe?
Because Delta 8 is a naturally occurring component of the cannabis plant, there's nothing to suggest that it is any less safe than Marijuana, which has a long history of being extremely safe. In the 80 years that Delta 8 has been knowingly produced from CBD, there have been no deaths or lasting health issues attributed to it.

More on indianastop.com
Some officials have recently expressed cautions based upon the potential for misuse of Delta 8 products.  It's also been noted that a full agency evaluation has not yet been completed. The majority of concerns raised seem to not quantify an inherent danger of the products, but caution about risks with unrecommended or irresponsible use. They also confirm the industry's already existing position, that these products should only be used and enjoyed by adults in a responsible way.

Is Delta 8 Legal?
Yes, Delta 8 THC is legal on a federal level, as was clearly defined for hemp-derived THCs in the 2018 Farm Bill. The Bill not only allowed for all derivatives, cannabinoids, and isomers of hemp to be legal but also specifically removed all hemp-based THCs from the Controlled Substances Act, a move that confirms congress did, in fact, know exactly what they were doing and that Delta 8 is not just the result of a legal "loophole," as some might falsely suggest.

Why Have Some Challenged Access To Delta 8 Products?
As with most things, some of the recent push against Delta 8 is centered around interests that seek to stifle natural science in the innovation of cannabis, and instead protect established product forms from new competition. In a word, greed. Competing industry and political groups for some hemp players and bigger Marijuana producers, with direct financial reasons for promoting doubt, have targeted Delta 8 THC because it sits almost perfectly between the two industries.

More on indianastop.com
To many users of Delta 8, it is a better, safer, and more responsible option than Marijuana, and a uniquely effective alternative to CBD. Yet even though this recently available compound has been received as a godsend for those seeking a happy medium between other established products, Marijuana groups have shunned Delta 8's significant potential for public benefit, and instead, are solely focused on how Delta 8 might hurt their profit margins.

Ultimately, Why Use Delta 8 Instead of CBD or Marijuana?
Delta 8 is regarded by many as being a more potent alternative to CBD and yet a more clear-headed and manageable experience than Marijuana.

So if you're looking for the benefits of a hemp-based cannabis product without the intensity or as many of the potential side effects of smoking Marijuana, Delta 8 may be a perfect option for you.

About 3Chi
3Chi is a pioneer in science-based cannabis research and was the first commercial developer of hemp-derived Delta-8 THC.  Based in Indiana, the company continues today as an industry leader in emerging cannabis science and innovative hemp-derived products. To learn more, click here: 3Chi.com

For questions and media inquiries, please reach out to: [email protected]